Radiant Historia (ラジアントヒストリア, Rajianto Hisutoria) is a Japanese Role-Playing Game for the Nintendo DS, developed and published by Atlus.

In the midst of an unending war for dominance between two super-powers, Special Intelligence Agent Stocke is assigned to a routine escort mission that goes horribly awry. However, wielding a mysterious book called the White Chronicle, Stocke discovers a way to travel to the intersection of time itself: Historia. With this power in his hands, he must travel back and forth through key events and an entirely alternate timeline to right the world's ill-fated course. The lives of his companions, the fate of nations, and the resolution of an impending disaster that now threatens the land all depend on Stocke's ability to discern the one "true" history. 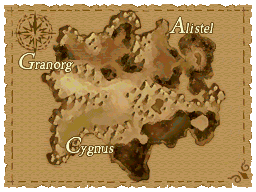 The desertification of the continent continues as Alistel and Granorg wage war for the remaining fertile land. Stocke is given a mission during this war, and is accompanied by his two newly appointed subordinates, Raynie and Marco, but the mission fails and Stocke nearly dies. However, with the White Chronicle he received from Heiss, he is able to go back in time and save his friends. The guardians of the Chronicle, Teo & Lippti, inform him that using this new power he must save the world from its imminent destruction.

Stocke then faces a crucial decision that would split history into two timelines, and he must go back and forth between the two to find a path to the "true history". However, he would soon discover that there exists another person with a similar book called the Black Chronicle, who is causing trouble in time and thwarts his progress.

Players control Stocke in a top-down 3D environment, where they can swing his sword to knock enemies back and stun them. Throughout the game, Stocke learns new abilities that can be used in the field in order to solve puzzles and advance the plot. 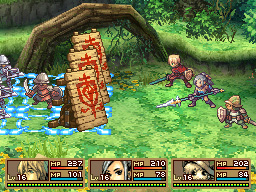 Battles begin when the player touches an enemy in the overworld. However, if the enemy is stunned before the battle, the player will initiate a preemptive strike, effectively getting the first turns.

In battle, enemies are placed in a 3x3 grid, with the playable characters forming a row in the right side of the screen. The closer an enemy is to the player, the stronger their attacks will be, but they also take more damage. The player can also switch turns between characters and enemies alike, allowing them to stack turns to create bigger combos. In addition, enemies can be pushed around to put more than one in the same spot, and subsequent attacks will damage every enemy affected until the combo is finished.

Later in the game, the player may learn special abilities called Mana Bursts. Every time characters are hit they fill up a mana gauge, and once it is completed they are able to unleash powerful attacks. 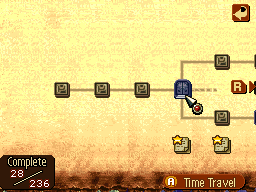 As the game progresses, the White Chronicle records all the events transpired, acting as a sort of journal, keeping important plot details.

During the Prologue chapter, Stocke faces an important decision which ultimately splits history into two timelines: the "Standard History" and the "Alternate History". The player must travel back and forth between the two in order to advance the plot, as both timelines are connected and they affect each other, and explore the different outcomes for their decisions. Many of these branches in time lead to the inevitable destruction of the world, but Stocke uses this knowledge in the past to find the true path in history.

Players must also complete various sidequests to uncover the truth behind the continent and their inhabitants, several of which are required to unlock the "true ending" of the game.

"Historia may not have the panache or cachet of this season's other RPG releases, but behind its humble surface is an engaging role-playing game that deserves a chance."
—1UP

"It's not often that we see a DS RPG with this level of creativity and polish in the story and gameplay departments, and the fantastic music and art only accentuate that. Even if you think you've done the time-travel RPG before, you should still definitely play Radiant Historia."
—Destructoid

"Radiant Historia might lack the breadth and polish of Dragon Quest IX or the contemporary chutzpah of The World Ends With You, but in its own way, it's every bit as memorable and fully deserves its place alongside them at the top table of DS role-players."
—Eurogamer

"Radiant Historia succeeds where those attempts fail; it is an inventive role-playing game that delivers the sensation of playing one of your old favorites for the first time."
—Game Informer

"While the story can drag at times, and reliving certain moments over and over can be tiring, it is ultimately a wonderful game that all RPG enthusiasts should make it a point to check out."
—IGN

Retrieved from "https://radianthistoria.fandom.com/wiki/Radiant_Historia?oldid=7435"
Community content is available under CC-BY-SA unless otherwise noted.